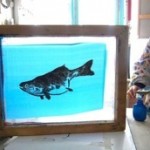 The word serigraphy was coined in the 20th century from the latin word sericus (silk) and the greek word graphein (write) but the process itself is 2700 years old. It originates from the Chinese who used the technique of the stencil applied to a piece of silk fabric to decorate cloth and write proverbs on paper. It was Marko Polo who got acquainted with this printing process during the seventeen years he spent at the imperial court of China and brought it back to Europe along with lots of other things he had put in his luggage (gunpowder, pasta, the compass, ice cream…). The weavers from the region of Lyon in France adopted and developed this method, which was used for several centuries to decorate silk and cloths. Actually, this method was called “printing à la lyonnaise”. The technique is still used today.

The craze for serigraphy as an artistic mode of expression in the 70s can be explained by the fact that the artists of the time, including Andy Warhol and Victor Vasarely, who were looking for a means of obtaining very vivid patches of colour, found in serigraphy both a technique and a mode of expression that suited their aspirations better than lithography or engraving. 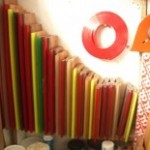 This screen printing process has also been completely mechanised for industrial application. Machines are used for printing in large quantities on all sorts of objects that we use every day – from yoghurt containers to garments, road signs and stickers. But this is another job… 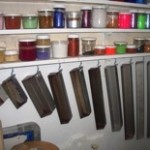 My idea is to preserve and transmit such traditional and totally handcrafted techniques that consist in transferring onto paper or onto a T-shirt a picture you have drawn on a screen of polyester (originally a silk screen). That’s why I give courses in traditional silkscreen printing.

For traditional silkscreen printing all you need is a polyester or nylon screen stretched over a frame of aluminium or wood, a paintbrush, a squeegee, a blocking substance and some paint. 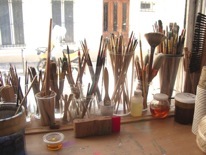 The principle is that of an improved stencil since it consists in blocking the mesh on the parts of the screen that you do not wish to appear. This can be done in different ways depending on the result you wish to obtain. The squeegee is an object made of wood and rubber that is used to force the paint through the screen in order to apply it to the chosen surface. This process enables you to obtain several copies of the same design, in one or several colours and on all sorts of materials and surfaces : paper, textile, cardboard, plastic, glass, metal, etc…

I was introduced to serigraphy during my years of study at the Paris school of Fine Arts (l’école des Beaux-Arts de Paris) and I immediately adopted this technique because it suited my artistic work quite well. Over the years I have developed other means of preparing screens so as to obtain different effects.

I also prepare screens with the photographic transfer method for specific requests. In that case, the picture is created on a computer, then it is printed onto a transparency which is placed over the emulsion coated screen to be finally exposed to an ultra violet light source. This technique requires no manual intervention. However, the printing process itself (pulling the paint across the screen with the squeegee) is in both cases done manually and this is the only valid method for art prints that are numbered and signed by the artist.